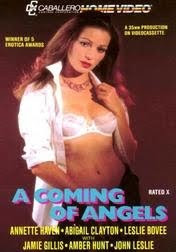 I was pleasantly surprised by this movie, I expected something completely different. In fact by the title and the synopsis I thought I will watch a light film based on the Charlie Angels series. This is not the case at all because the mood of this movie is rather dark. The film is set in a secluded location and the subject is the white slavery. Throughout the film we see how Mark (Jamie Gillis) is capturing his victims and how he tame them. Although the topic seems to be in bad taste this is not the case at all. For example, during a scene between Mark, Robert (John Leslie) and Andrea (Susan McBain) we quickly see that what should be a sexual humiliation became a summit of erotisism because of the apparent Stockholm syndrome of Andrea. To make the film more light numerous flashback scenes are presented and there is a running gag throughout the film with John Leslie who can never finish his relations. I was somewhat disappointed by the end of the film because I expected a stronger revenge by the girls.

The interpretation in this is the best you can get in this genre with Jamie Gillis playing a bad guy like him only can, John Leslie does well in a cast against type role, Abigail Clayton playing perfectly again the innocent victim (she was unfortunately typecast in that kind of role) and Amber Hunt gave a surprising interpretation in comparison with what she usually does. Leslie Bovee and Annette Haven without being great are corect and the Eric Edwards' talent is wasted in a non-role. Surprisingly Joel Scott, the director of this film has never directed another film. I strongly suspect that this name is an alias for someone more famous since he was the author and producer of Sometimes Sweet Susan a film whose director has used the same ploy.

This film is available trough Excalibur Films on dvd.