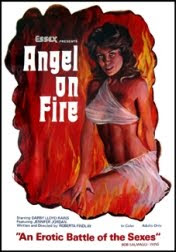 I always liked the Roberta Findlay's movies, so it is not surprising that I liked this one also. It is not the most original film in the history of cinema, but it is certainly an above average adult movie. Basically the subject is the expiation of the sins Steven (Alan Marlowe, one of the most underrated actors of the 70s) has committed just before his death. The atonement came in the form of a return on earth thanks to the intervention of the angel # 9 (Jennifer Jordan, one of my favorite actresses) in a female body (Darby Lloyd Rains) by which he  will lived what he had made lived to Linda (Jason Day) his last girlfriend. Like any film by Roberta Findlay we felt the impression of listening a movie and not a fuck fest (I have nothing against the one day wonder, but I like much this kind of cinema). The story is still quite complex and Steven will meet his equal in the person of Jeff (Jamie Gillis, always equal to himelf) and he will suffer the same rejection almost word for word. A film I strongly suggest to discover the quality and eroticism that were present in these productions (the first scene between Darby Lloyd Rains and Jamie Gillis is a good example, if someone who had seen the film know the intrumental song used in it I'd like to know).
This film is available as a very good quality stand alone version from VCX (The version I own) or in a double feature dvd from Alpha Blue Archives (but probably in a lower print quality).