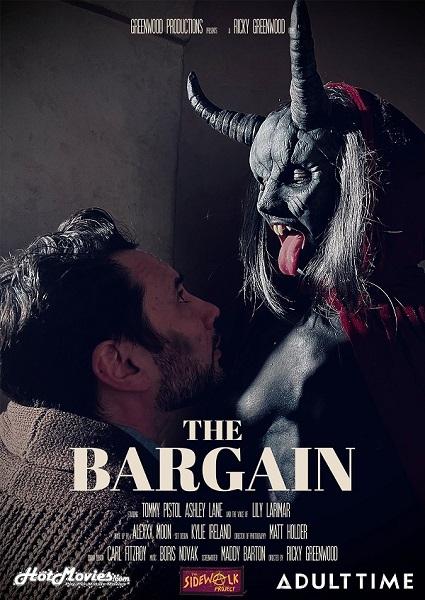 For the Holiday celebrations I wanted to do something different this year and spend an entire week reviewing movies centered around this theme. Everyone know that I am a big fan of Ricky Greenwood's work, so why not start with his most recent production.

We all know that if we are nice Santa will come visit us with gifts at Christmas Eve, but what happen if we weren't nice but naughty? When I was a kid the version I was told was that Santa wouldn't let me a nice gift but a lump of coal. My parents never told me the other tale... you are visited by Krampus and it won't be a good time, so thanks mom and dad for not traumatizing me with this one.

Tommy is sit in front of his kids bed and tells them about something that happened to him when he was a young children... his encounter with Krampus and how he sacrificed his younger sister to appeased her, but that wasn't enough to satisfy Krampus hunger. Tommy made a deal that someday when he will have young kids he will let Krampus have them.

All the time we hear noises so there is something coming and obviously it's Krampus who come for sealing the deal. When she enters the bedroom it's all business for Krampus but Tommy wants something else before giving up his children, he wants to feel what it's like to be inside her and she agrees.

By the reactions of Tommy we guess that he doesn't have sex with Krampus because he is aroused by her. He has another motive, who is to save his children and put an end to the deal. But will he succeed?

Now that was something different than usual, but I don't expect the same old same old routine when I watch a Greenwood's film. I don't want to sound like a broken record but Tommy Pistol was amazing in this one, what a great actor he is! Not only that but he is braver than me, I would have been so nervous to had my dick hurt by those teeth during the oral sex that my erection wouldn't have last... but this is why he is a professional and I am not. Ashley Lane was also great, staying in character from beginning to end in a non flattering role... I have a feeling that few actresses would have want the part. The make-up effects on Krampus by Alexxx Moon was astounding and the film depends a lot on it, I mean a bad job and the result would have been laughable and one thing for sure it wasn't. Good job from Kylie Ireland again for dressing the set. I won't say that the sex was arousing, but it works for what that story wants to convey... unless a six breasts "demon" with very long nails is your kink.

Sure worth a watch and something I feel important to add is that all the proceed from the sales of the film goes to a charity. So if you have always wanted to do a good deed while indulging in your "sins" it's your chance. You can buy the film exclusively from Hot Movies and help the homeless at the same occasion doing a donation to the Sidewalk Project.