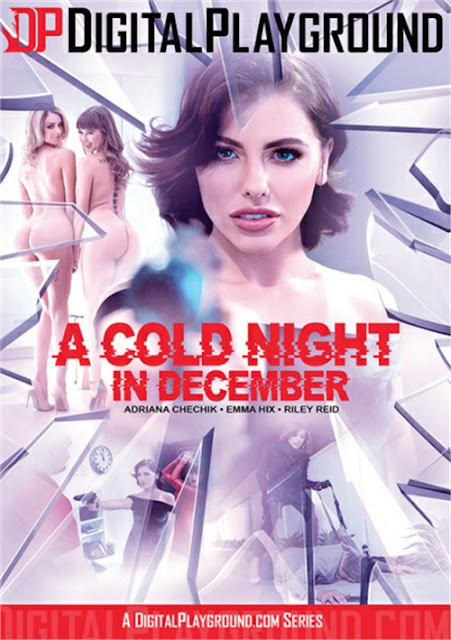 Next in my Holiday week an adult crime feature from Digital Playground directed by Francois Clousot. That doesn't sound that christmassy I know but everything start because of the Christmas bonuses so that work for me...

Veronica and Ethan are both business partner but Veronica is the big boss of the company. After receiving an email about the Christmas bonuses that won't be given this year Ethan goes to Veronica's office to discuss the matter... obviously the discussion goes further than just words. Sure but there is something more important, Ethan finds a folder on his partner desk containing bank receipts demonstrating that she embezzles money from the enterprise. He is ready to forget about this as long as the employees get their bonus and Veronica agrees. In theory she does but later that evening she follows Ethan and shoot him in a dark alley.

The following day Brie, the company accountant, notice that something isn't kosher with the annual financial report while working on it. She goes to Veronica's office and this is when she learns that Ethan left the company permanently, something that sound strange to her since he and her where a couple in the past and it's even stranger when she found a piece of Nathan's jewelry that she bought him on the floor before leaving. She talks with Trish, Veronica's secretary, and they agree that something is rotten in the state of Denmark and must find what it is.

Luckily they find the perfect solution to put their plan on motion when Trish learns that Alan will spent the night at Veronica's place, so it will be the perfect occasion for snooping around if she goes with him. Trish finds the evidence they needed during the evening and it's time for some fun with Veronica's slave toy.

After Trish and Allan left Veronica notice that somebody went to her work room and it doesn't take long to figure that it must have been Trish. While she's there she got an email telling her to go to her office in one hour to meet someone who knows everything... surprise it isn't Trish but someone else and it's time to pay for what she did!

Digital Playground is often hit or miss for me but this one was enjoyable, not that it was the most complicated thriller ever made but the story was interesting and had more meat around the bone than usual for their features. Adriana Chechick was just perfect in her role of a bitchy boss, sure looks like she had a lot of fun with the part. Riley Reid was super cute as she always is and wear glasses to make thing even better, come on girls with glasses are sexy. Great to see Jake Adams too on the screen as we surely miss him. In fact no one in the cast was bad on the acting side. The sex follow the usual recipe so nothing unconventional here except for a tame domination threesome, but we get a good lesbian scene between Riley Reid and Emma Hix.

Nothing groundbreaking but it worth a watch, you can watch it on the Digital Playground streaming service if you're a member, if not you can easily buy it on VOD online and the DVD is probably not that hard to find too if you prefer a physical copy for your library.