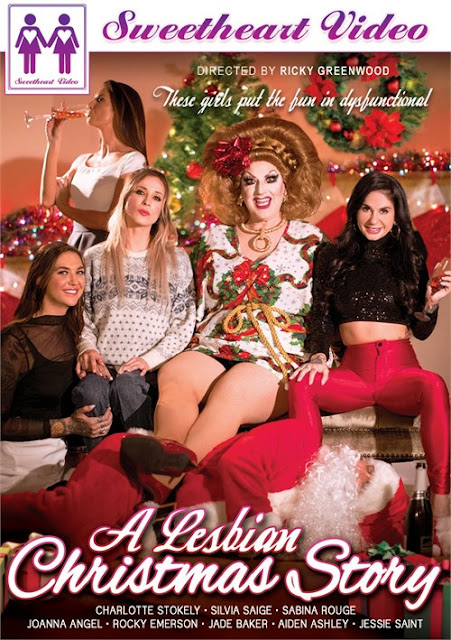 It's Christmas Eve so what's better than a comedy and, even better, an all-girls production from my favorite director.

It's almost Christmas and everybody is coming at the Bell family house for the evening, but everything must be perfect since Ms. Bell (Jackie Beat) as an ulterior motive for this party... she wants to ask her rich sister Fable (Silvia Saige) for money. So she put her daughter Eve (Aiden Ashley) and a maid (Rocky Emerson) in charge of keeping everything clean.

Slowly but surely the family began to arrive and the party kind of starts, the guests do their things separately but everything seems to go according to the plan until... a drunk Mr. Bell arrives at home with Lola (Charlotte Stokely) who is Fable's ex-girlfriend.

But Lola isn't the only source of worry since Ms. Bell's sister in law (Joanna Angel) isn't the most stable person in the world and she can explode at any time during the evening.

Will Ms. Bell get the money she need? Will Fable and Lola come back together? Will Fabula cause trouble? Will Eve manage to have fun despite her unloving and strict mother? All those questions and more will be resolved at the end of the film...

You should know by now that an all-girls feature equals a great time for me, so I no surprise if I say that it was highly enjoyable. Sure Jackie Beat overact but from what I have seen before it's part of a drag queen act to exaggerate everything without mentionning that the performance is an hommage to Divine works in the John Waters' films. There is a lot of fun moment, by example the conversation between Silvia Saige and Charlotte Stokely or David drunk antics. There is some less fun moment with the interaction between Aiden Ashley and Jackie Beat, she sure plays a despicable mother and Aiden show again that she is a great actress.

Now let's talk about sex... the foot fetish scene between Sabina Rouge and Jessie Saint was the most sensual and arousing one I have seen in a long time, God that was hot! Obviously the other three can't compare but they were fine girls scene too, by the way I'm not the biggest tattoo lover but I really like Rocky Emerson's ones and they sure deserve the work of arts name.

Obviously I recommend this one... You can easily find it for sale on VOD online and some store stores always have it available on DVD if your prefer this format.