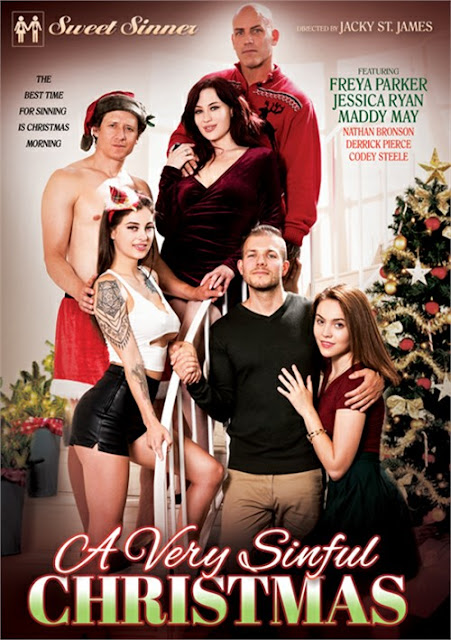 Just in time for the Holiday we get a new family Christmas theme film written and directed by Jacky St. James from Sweet Sinner. In a way this is a lot like the old "Family Holiday" series they did some years ago...

It's Christmas and it's time to celebrate with the Jones family and there isn't a better occasion to meet the new members of the family. To do so the parents (Derrick Pierce and Jessica Ryan) will welcome their children (Codey Steele and Maddy May) with their fiance (Freya Parker and Shawn Alff) for this year celebrations.

Quickly we discover that the Jones aren't your typical family, no surprise here, when Maddy tried to charm her brother jumping in the bed just after his girlfriend leave the room. Her attempt failed and as a reward she must hide in the closet while Codey and his fiance go for some morning action in an incredibly noisy bed.

At the gifts exchange things take a turn for the extreme when Maddy's boyfriend gives a diamond bracelet to his girlfriend's mother, obviously Maddy doesn't take it well since her gift from him was a bottle of nail polish. Jessica goes upstairs and Shawn follows her not long after... surprise they have an adventure together, OK not that big of a surprise considering the costly gift, and it's time for Jessica second present. No it isn't Shawn but a friend of him... Nathan.

After Jessica consumed her gift it's time to go back downstairs to find what's happening down there. The exchange is pretty much at its end and Freya wants to try the new motorcycle Derrick got for Christmas, so they both go together for a test ride and time for another surprise... they have an adventure too!

Being alone it's time for Codey and Maddy to discuss the morning event. You know where it's going right? Maddy will have her way with her brother (OK step brother, but you know what I think of the use of those words in modern cinema already so it's code word). After all this everything ends well and we conclude on a nice surprise.

All in all that was enjoyable, of course it was predictable since it followed the Family Holiday mold but why reinventing the wheel when the wheel works fine? The cast played well together and the chemistry was good, even Shawn Alff got a bigger non sex role than usual. Jessica Ryan is a little bit young to be Maddy May's mother (the age difference between the two actresses is only seven years), but suspension of disbelief is a thing and Jessica is a sexy redhead so who cares? I have never seen Freya Parker and Maddy May in anything before so for me it's a plus since I'm always happy to see new visages on my screen. For the male cast we already know them quite well. The sex was good, but seriously do something about the noisy bed this is so distracting.

Not the most original film, but it sure worth a purchase on VOD.