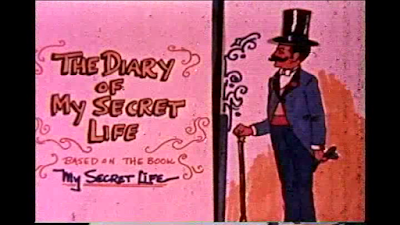 This film is set in the 19th century and they did some efforts so it isn't your usual set in a room early West Coast production. Of course it's a little bit cheap, the sets aren't perfect and the camera work left a little bit to desired but it's betterly done than most film from that era.

The film is based on a book (they say so and I'm too lazy to search so I'll take their words on this) written by an anonymous author this is why the director use a different character for each stories which is fine because who would want four scenes with Hobe Ferris and his disgusting dick?

There isn't much to say story wise since the format of the book involved a loop carrier format. The first story is about a man and his maid (Sandi Carey and Billy Lane), the second is about a nobleman adventure with two ladies of the night (William Howard, Nancy Martin and Orita De Chadwick), third one is again concern a man and his pregnant maid (Keith Erickson and Eve Orlon) and finally the last one is about a man and a soon to be married harlot (Hobe Ferris and Monica Wilson).

The quality of what I have watch wasn't that great and the film cut before the end, not that I think that much is missing but it's annoying. The SWV DVD-R quality is maybe better than the ABA version but since I don't own that disc I can not guarantee it. Anyway it isn't something I would call essential, but on the other hand the ABA four discs set (Young Lust Volume 1) who include this film contains some interesting films like Teenage Runaway, Flossy a Venus of 15 and Oh! Fanny so it could worth a purchase if you can find it for a cheap price.