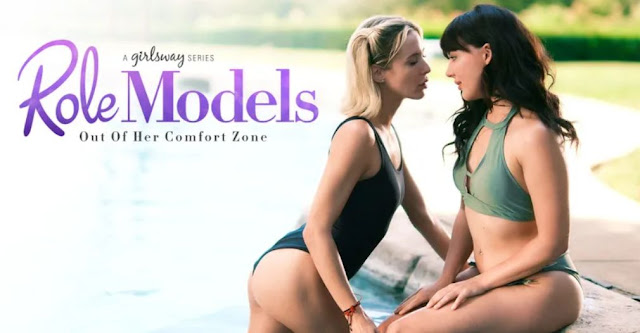 A short scene while I'm waiting for two major series to drop their last episode next week. Nothing too deep storywise but there is nothing wrong with that occasionally.

Aiden appears early for a swimming learning class and she isn't sure if it was good decision or not, in fact she is almost ready to quit when the instructor shows up to greet her. She decides to stay but we quickly see that Aiden really lack confidence in herself.

Whitney convinces Aiden to switch the swimsuit she wears for an extra one she has... which is certainly a good suggestion since that red bikini looks great on Aiden. They talk a bit at the pool and Aiden reveals that her recent divorce is the reason why she doesn't feel that confident about her look. She also confess that she is bisexual and Whitney tells her that she too is lesbian. From there you certainly guessed that the swimming lesson will turn to something else...

Not much to recap since it's a 35 minutes scene, but the quality is better than most of the recent Girlsway scenes. Just the fact it isn't confined in a room and set outside make the scene looks less cheaper and more enjoyable to watch. You can't go wrong if you hire Aiden and Whitney for a girls scene since both aren't newcomers and the girls scenes they are in always feel authentic... also as you know already I'm a big fan of Aiden. By the way Aiden new shorter hair are awesome, I saw pictures of her when she changed her look but this film is the first time I saw them on the screen.