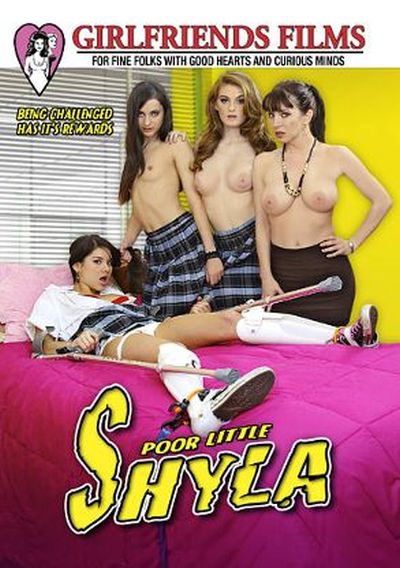 I haven't reviewed an older movie in a while so I went deep in my VOD collection to pick a classic all-girls title... the film being twelve years old the captures won't be as good as usual since the resolution is only 480p.

Shyla (Shyla Jennings) wants to be friend with the popular girls at her school which isn't obvious since she is disabled and wear braces on both legs. One day she hits the jackpot when Faye (Faye Reagan) invite her to come at her house after school... sadly this is all a big joke and Shyla is almost rape by Faye and her friend  Georgia (Georgia Jones), thankfully Faye's mother (RayVeness) intervene before it's too late.

After all the talks we think that everything is over but Faye haven't said her last word and she will play a last sick cruel joke taking advantage of Shyla's little sister Taby (Zoey Kush) to end the film.

No doubt here this is the best film produce by Girlfriends Films and surprisingly it isn't what you think it will be since the story isn't about Shyla and her condition, but about older women teaching love to younger girls. Even if it's all before the opening credits Shyla Jennings is very convincing playing a disable woman (she isn't during RayVeness fantasy) and Faye Reagan plays the role of a manipulating bitch perfectly. The scene between Ariella Ferrera, Georgia Jones and RayVeness is certainly one of the best and realist lesbian scene I have seen (even if it clocks at 70 minutes the scene doesn't felt too long)... sadly that high point make the rest of the actions poor in comparison.

Even with the poor visual quality I recommend this one, the story and the action are enjoyable and this show us once again the Shyla Jennings has a portrait of herself in her home that age while she stays young... seriously she is the most beautiful actress in the history of the genre and she is even more beautiful today.

You can watch the film on the Girlfriend Films streaming service or buy it pretty much everywhere on VOD or DVD.