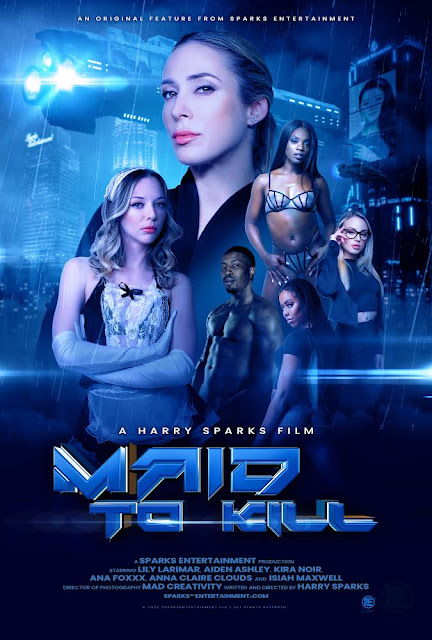 Time for something I anticipated a lot since the first time I heard about the film via the AVN Media Network. It sounded like a good budgeted production, the trailer was quite interesting and it even got, something we don't really see anymore, a theater premiere... too bad that I live up north because I'd I loved so much to be there.

The population of the United States fearing overpopulation choose to elect a fascist President to face the foreseeable crisis, we are now in the year 2058 and a authoritarian government is in place. Its first act was to outlawed all sexual activities, if you're caught by the spying drones the men are killed on the spot and the women are sentenced to life of slavery as a maid.

It's a happy time when Lily (Lily Larimar) ask her girlfriend Jessica (Kira Noir) to marry her, there is so much happiness that both of them forget about the no sex act and, sadly, they are caught in the act by a drone. Jessica is immediately sent to a detention center and Lily is brought at the security agency for a meeting with Melissa (Aiden Ashley).

Everything isn't lost for Lily since Melissa has a proposition for her: a maid assignment at Marcus house to kill him. She doesn't really have a choice to accept the offer since she will never see her girlfriend again if she refuse. We quickly learned the reasons why Marcus is Melissa's target, he cheated on her the day of their wedding night with her best friend some years before... to be honest I can understand her point.

Marcus brings Lily at her home to serve as a family maid and more since she has a sex pass oblivious of the hidden motive of her presence. Immediately Lily put her focus on her assassination mission, will she succeed or not? Will she ever see Jessica again? I will certainly not tell you... you will have to watch the movie to find the answers.

This one was quite enjoyable considering that it's from a label I never heard of before. The concept was different than what we usually get, sex is forbidden and a major crime (but for me it's weird that all form of sex relations are since lesbian sex sure have zero effect on the overpopulation). The computer effects for the future Los Angeles and the drones camera are well done. The story without being complicated is interesting and, obviously, the acting is above grade. Aiden is as awesome as always and Isiah Maxwell was quite good too, but Lily Larimar was the real surprise for me since she was 100% credible in her role and she sure kick some major asses at the end. Talking of the end this isn't what I expected for sure. The only problematic aspect for some could be the sex scenes length as most of them are on the shorter side, not that it was that big of a deal for me as I'm not huge fan of endless and by the book sex scene. Since we are in the sex department I must say that the scene between Aiden Ashley, Lily Larimar and Anna Claire Clouds was the highlight of the film and, in my book, certainly worthy of a nomination at the next awards season.

At the time I wrote my review the film is an exclusive at the Sparks Entertainment streaming service but I'm sure it will get a real release at some point in the future... at least I hope since you can't download on their service (which explain why the captures aren't that great since I did them screen-capping on my computer screen contrary of what I do usually with Power DVD) and I will have to buy it if I want the film in my permanent movie collection.