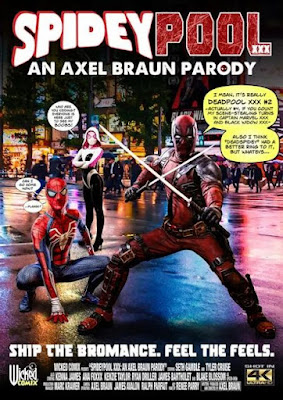 Axel Braun is back with a superheros film and this time it's Spiderman who get the adult treatment. The release was delayed a while but finally it went live last weekend so it's time to watch the movie.

After a night patrolling the streets Spiderman (Tyler Cruise) is back home ready to have some fun with his girlfriend (Kenna James). Sadly for him this isn't Mary Jane's plan since she has something more important in her agenda: an audition for the newest Deatdpool movie. No time to waste as soon as she woke up May Jane immediately left for the audition. After her performance she can't resist Deadpool's charm and has sex with him backstage...

Later that day Deadpool shows up at Mary Jane's apartment ready for an encore but he will learn something he didn't know, Mary Jane isn't single. Obviously Peter Parker doesn't take the fact well and after talking together for a bit they come with the perfect solution for this problem... going back in time!

Time traveling isn't something Deadpool can do so they need someone who posses this power. They go meet with Monica Rambeau (Ana Foxxx) who can't do it either but she knows someone who can help them, Captain Marvel (Kenzie Taylor). She will go with the duo to meet Stephen Strange (Ryan Driller) who has that ability since he is the supreme sorcerer.

After some hesitations he accepts to do the task but he warns them that it could have consequences and you bet it will... following the incantation Peter Parker wake up in a different universe where he was never bit by a Spider but Gwen Stacy (Blake Blossom) was. After doing you know what Peter warp back in his correct universe before Mary Jane's audition and this time he will go with her.

Unsurprisingly that was enjoyable, Axel Braun sure put more efforts and love in his superhero movies that Marvel / Disney does. The story was fun to follow, not the most complicated one but the correcting a bad thing motive was enough to drive the action. Many superheros are included and all their inclusion make sense, obviously I was glad to see Kenzie back in her Captain Marvel costume (Axel when will get Captain Marvel 2?). As usual the costumes are great and Seth Gamble does an amazing job playing Deadpool (he didn't win an award for this role in 2019 for no reasons). Ryan Driller as Doctor Strange was a perfect casting and Blake Blossom was a great addition in the Braun's superhero universe but I guess we won't see her back in the role since it was an alternate dimension (also I won't lie, Blake is smoking hot!). Sexually speaking Kenzie Taylor and Ryan Driller steal the show with their scene. Take it for what it worth but I have a feeling that something is missing so I wouldn't be surprise to see a future release with an added scene between Peter and Mary Jane (kind of make sense to me since they are the main couple and the current movie only have three scenes which is unusual).

At the time I wrote my review the film is exclusive on the Wicked streaming service but it shouldn't take long to get a general release and I sure recommend it if you like adult superhero movies.
Posted by Jimmy at 1:34 PM