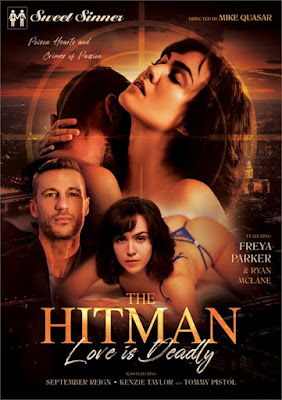 Mike Quasar is back doing feature film after a period of shooting mostly scenes for stuff I don't buy and I must thank Sweet Sinners for this, but has he kept his magic touch? This brand new film is the perfect occasion to find if he did...

Not wanting a divorce with his wife Tommy hire a hitman to kill her before she has the chance to break their union. At first he fears that Ryan could work with the police force but quickly this is put to rest since Ryan is a professional and Tommy gives him the 200,000$ contract.
As usual with those events in real life there is more than a possible divorce case behind this need to have his wife killed... Tommy have an adventure on the side and, more important, Freya life insurance worth two millions dollar.

Ryan goes on with the plan but when he does his move he hesitates when he learned more about the private life of his target and he decides to wait. This decision displease, to say the least, Ryan's wife (or girlfriend I'm not positive)... he never made it personal before and they really need the money.

What will be Ryan choice? Will he act like the professional he is or go with what his heart tells him? You will have to watch the movie to discover it...

To answer my previous question... yes Mike Quasar's magic touch is always there, there is a reason if he is in the industry since more than 25 years. The story, uncredited for some reasons (why?) is quite interesting and the many turns sure keep it from start to finish... one thing for sure I didn't saw the end coming. The multiples locations and the exteriors scenes result as a more movie like visual, as I say often going outside gave production value to a feature. Obviously on the acting side this is very good and credible... Ryan McLane gave one the best acting performance I have seen this year, Freya Parker's performance is certainly worthy of a best actress nomination, Tommy in a supporting part is excellent as always, Kenzie continue to show us that she is a good actress and September Reign, I never saw before, does a good job too. Sexually speaking everything is fine which isn't a surprise since Quasar is one of the best at shooting sex scenes.

I sure hope that Sweet Sinners will continue to let Quasar direct more features like this. You can get the film on DVD or VOD pretty much everywhere and I highly recommend that you add this one to your collection.

By the way Ryan was on Kenzie's podcast not so long ago... this is a very good interview if you want to learn more about him since he isn't the most active on social medias.