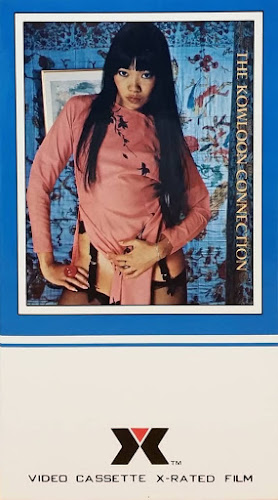 Bob Chinn have done some low budget films and this is one of those. The film was certainly shot in one weekend (a productive one since he did Oriental Kitten at the same time) for a theater owner and not for a lot of money (I would bet less than 600$ for both).

Jackie (Mea Tue, of course this is an alias) is in trouble since she owe money to John Holmes (this isn't his character name but if they called him something else than the boss I missed it), so he sends Jack (Paul Scharf) with a serious warning: she must bring the money before the end of the day (sometimes it's 100$ and sometimes 300$ so who the hell knows how much it is).

To raise the rest of the money some unknown black girl with a bad wig will give a pitiful blow job to Jonathon Younger.

When the cash is raised Jackie and Suzie go at John's house to pay the debt and Suzie ask him for a job, he ask to try her, they do and Suzie have a surprise for him. The end...

To be honest this film doesn't have much going for it and, unless you are a completist who want everything made by Bob Chinn, I don't recommend it. Not that it isn't watchable, but this is very cheap and the female casting isn't that memorable (Toni Scott is the big name but she is wasted in a non-important role wearing a bad wig). At least at 54 minutes long it's hard to call it a waste of time.

The film is on DVD but don't waste your money for that and go for a rent if you really want to watch this.