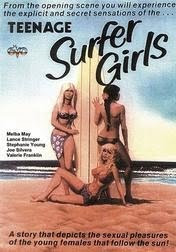 Second and final film directed by Boots McCoy and as with Blazing Zippers  (his other one) I'm very unimpressed. This time he fell on a lot of surfing stock footages (the last time it was rodeo) and he will build his movie around this. I say around because there are really no connection between the action and  the surfing. The film begins even in the same manner as his other with one of the actresses (Justina Lynn) telling a fantasy she has in her dreams (except that she's not the girl in her fantasy even if it happen to her). I was almost certain she would meet a psychiatrist played by John Seeman after, but it won't happen this time. As in his previous film it's poorly shot, poorly lit (the last scene filmed without lights and through a red filter is a perfect example of this) and badly acted. This is unfortunate since Melba Bruce and Justina Lynn are the two main actresses and Joey Silvera gives a rather good performance (which is certainly not the case of Tyler Reynolds). At least this proves that some productions of that time deserve to be forgotten (which happens frequently with the West Coast productions).

This film is available on the Excalibur Films website.
Posted by Jimmy at 11:16 PM