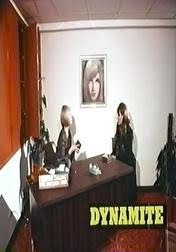 If I trust imdb the version of this film I own is incomplete (1:13 vs. 0:51) by cons I strongly doubt it because the film seems fairly complete to me. So what we have today is a rather well done production of the Amero brothers, even if this movie is not as bizarre than Bacchanale their previous output. Obviously being a production from the beginning of the seventies the story is not that complicated and is more an excuse to present a series of sex scenes. But this story is still interesting as we follow an hawker saleswoman who sells sexual aids article and the majority of these encounters are quite amusing. The last one is definitely in the WTF category and it's really hard not to laugh from  the beginning to the end. This one takes place in a cinema where Monica Rivers (a ravishing redhead) had a sexual relationship with the manager of the theater (Leon Oriana) in front of the screen while the customers watch a movie when suddenly the lights turn on, they continue normally (or as normally as possible when a crowd watches and applauds) when suddenly Stars and Stripes Forever begins to play and a couple (Kurt Mann and Darcy Brown) comes on stage to tap dance and Kurt Mann smiled as it was the best day of his life. Obviously the others meetings does not equal the greatness of this final, but they all have their moment of fun. If we except Dolly Sharp, Jamie Gillis, Kurt Mann and William Love (apart from this film he was in Deep Throat) the rest of the film cast is composed of one timer. But a really well known actress appear in this film since it's the last one of Uta Erickson who has been in countless New York softcore roughies. The only real complaint that I can make about this film is that it was not recorded live and the voices were added later in post-synchronization (which is pretty obvious with the voice of Jamie Gillis since it isn't his voice at all) and some of those voices are rather annoying and unpleasant.

To the best of my knowledge this movie is not currently available on dvd.

Update (march 28)
Video-X-Pix who own this film works currently on a release of this film. It will be a 2 movies set including also Every Inch a Lady, Jon Amero will be a part of the project. I don't know yet if the result will be a Platinum Edition or a regular boxset, but it's a very good news for all the golden age movie lovers. Thanks to Steven Morowitz of VXP for the update.
Posted by Jimmy at 2:00 AM