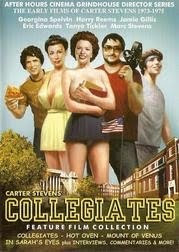 First film directed by Carter Stevens and for a start it's quite well (which isn't necessarily a surprise since Stevens always used professional crew for his films). The film as such does not have the most original story (a group of college girls living together, one of them is still a virgin and is horny all the time). What is the strength of the film is the choice of Tanya Tickler to play "the flaming virgin". As Stevens noted in his commentary she isn't really the most beautiful actress who had appear in this kind of production. What makes her attractive is the fact that she is the every day girl,  probably not the first girl you will choose in a group but the one with which you will end the evening and will stay with forever afterwards. The majority of the female cast has not had a long career (if we except Kim Pope and  the already mentioned Tanya Tickler) and only Ashley Moore and Harry Reems has really had a long career after this film. Mark Andrews, the main character's  in Lickity Split (the second film directed by Steven and his best one) is  also present in this movie and is really hard to recognize. Another positive point is the fact that many scenes were shot outdoors contrary to what is the case with those productions usually (without saying that the film location is magnificent). The sex scenes as such are not extraordinary (except for one group scene in a bath which is rather amusing), though the appreciation depends of your tastes, but personally I ain't the biggest group scenes fan and they are good part of the action. A movie I've really enjoyed and once again a proof that a lot of better movies than Deep Throat were made in 73.
This movie is available on the Alternative Cinema website in a high quality collection of Carter Stevens films (filled with extra and completly restored).