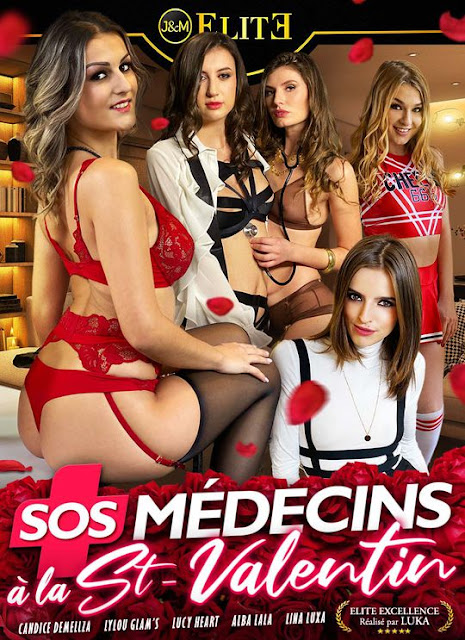 Back from my break with a review of the latest Jacquie et Michel ELITE release directed by Pascal Lucas. The film is in french only with no subtitles so not english friendly but this shouldn't be a problem if you don't speak the language.

It's Valentine Day and it will be a busy day for the village doctor (Rico Simmons) who will get the help of a student (Candice Demellza) who, if everything goes well, should replace him.

Their first case of the day is a man (Niko Lovax) who shouldn't have used pills since he stay erect after having sex with his mistress (Lylou Glam's). But this is nothing compare to the next emergency... the guy (Tyler Diaz) is stuck inside his mistress (Lucy Heart) pussy. Maybe it would be a good idea for the village men to celebrate the day with their wive and not their mistress.

Thankfully a doctor's day isn't just hard-on trouble and people stuck... the following visit who is in fact a false one will be the occasion for our doctor to have a Valentine Day treat from a single patient, so no cheating this time.

If you are familiar with the label you already know what to expect... a lot of sex and tasteful anal. Surprisingly protection is used only for one scene, I guess France put finally an end to this ridiculous mandate (unless the film wasn't shot in France). As usual we get some really beautiful and sexy European women in the cast and strangely the cast is mostly French for this film (only Candice Demellza and Lucy Heart are East Europeans and to be honest Lucy doesn't really talk with an accent) so everything is easy to understand... at least for me since I'm French Canadian. Another nice details is that for most scene the actresses stay partially dressed, so if this is your fetish this is the film for you.

I wouldn't say that it's a must see but it worth a watch, a good compromise would be to wait for the film to be watchable via a website membership (by example the Elite releases are part of my Gamelink Unlimited account after a while) but if you don't want to wait you can purchase the film on VOD directly from  J&M Elite or stream it if you are a member.