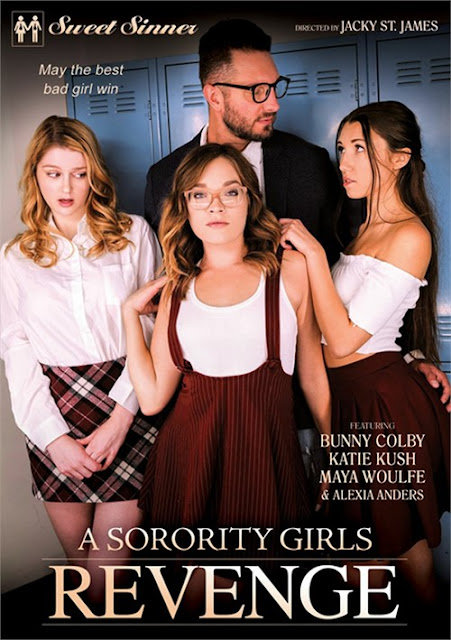 Sweet Sinners, Jacky St. James and schoolgirls... this was hard to pass this one, this is why it was on my wish list since I saw the film in the coming soon section and I bought the VOD the first day it shown up at the store where I do all my purchases. But did it meet my expectations? We'll see later...

Lauren (Katie Kush) is the President of her Sorority and since it's pledge week why not hit two birds with one stone? She wants her favorite teacher to get a promotion and to do so the plan is to manipulate Amy (Bunny Colby), a new pledge, by telling her that the condition to become a member is to have sex with a teacher and providing the evidence.

Amy doesn't really believe it but Brooke (Maya Woulfe) confirms that she fulfilled the same obligation the year before. So Amy goes with the teacher seduction plan since she wants to be a sorority sister, but being a preacher's daughter this isn't that obvious for her. She isn't fast enough and Lauren must pressure her as there is a deadline for the nomination of the new college dean, so she assigns her to Cole James (Quinton James) for the seduction act.

Their encounter is quite awkward at first, but they finally go to a hotel room together to fulfill the task... except that she change her mind after and decides to not become a member of the Sorority. Evidently the initial plan doesn't work anymore.

Time for plan two... Lauren arranges an interview with the student newspaper that will be conducted by one of the sorority pledge (Alexia Anders) to do a positive portrait of professor McLane and of course you know already know how it will end.

After the interview Joanne goes to see Lauren with the evidence needed to become a sorority sister since she has an audio recording of her sexual relation with a teacher. But was the plan was to help professor McLane to become the new dean or something entirely different?

No surprise here, Jacky St. James gave us another enjoyable film. It's a little bit on the low budget side as we don't get one exterior scene and the locations aren't that impressive, but the story is fun and the casting is good (personally I would have switched Katie Kush and Bunny Colby roles). In the acting department everything is fine, but Bunny Colby, Katie Kush and Ryan McLane are the ones who shine here (Maya too but she isn't in the film for long). The sex is quite good too and well shot by Mike Quasar but he is a pro so he knows how to shot a scene to make it good.

No problem to recommend this film, it's a nice little movie, well cast and enjoyable... if only Maya Woulfe role would be bigger. You can buy it on DVD and VOD at your usual web store.