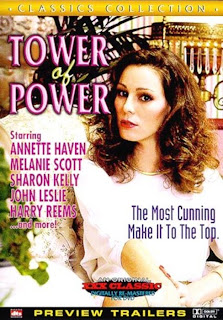 A short visit in the world of the rich and powerful with this production of Gary Graver. A traitor is hidden among the directors of the Tower  Company and  this traitor had revealed some secrets to a rival company. Fred Kingsley (Robert Kerman) the majority owner announces the news during a special meeting of the board of directors and gives himself a week to find the culprit. Who is it? Claudia (Annette Haven) who owns 20% of the company, Hugh (John Leslie), George (Harry Reems) or his wife (Janey Robbins). On paper it sounds like a good scenario, but it is not expanded more than necessary and the revelation of the traitor's name comes without surprise and really fast at the end. This does not mean I did not like the movie because it's hard not to like a Gary Graver's film. As usual his direction is perfect, all is well filmed and the pace is efficient (the mixture of the scenes between Robert Kerman and Janey Robbins with the one between Annette Haven and Herschel Savage who takes place at the same time is a very good example of this.). In addition of the names already mentioned Angel (I think you already know I love this actress) and Sharon Kelly (not using the Colleen Brennan alias as she usually does) are also part of the  film distribution. Even with my reservation about the plot this film is a recommandation and a good exemple of how to edit a movie when a lot of sex scenes are present.


This film is available on the AdultDVDMarketplace website.
Posted by Jimmy at 10:53 PM