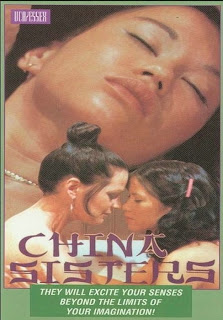 A film that I consider to be medium. Not a bad film as such, but nothing to be considered a classic. This is a film of Anthony Spinelli  who usually is a good director (I even appreciate his DTV productions such as the Catalina Five-O serie), but the format used didn't succeed to keep my interest. The story is narrated by a woman (Vicky Lyon) who dictates her memoirs on tape. Her memories are quite interesting as it includes an incestuous relationship with her younger sister (China Leigh), the seduction of one of her underage students (Don Fernando) and a threesome between the two sisters and Jack Wrangler that reminds me the most arousing scene in Misty Beethoven (a little bit cheaper, but at least Jack Wrangler doesn't use a stunt double). John Leslie also appeared in the film in a rather bizarre scene thank you. As I said an okay film but not really an essantial classic. Doesn't really worth the trouble of searching to find it.

This film like most of the Essex Video's Catalog is not available on DVD.
Posted by Jimmy at 4:07 PM