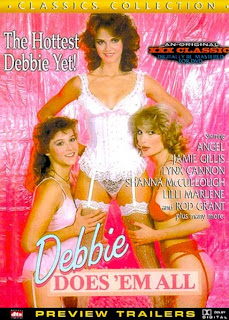 If you own 42nd Street Forever XXX-treme edition you have probably already watched the trailer for this movie (not to mention the awful ripoff of Holliday who plays in it). You know already that this is a vehicle for Angel which is certainly not a problem because you have to admit that she has a great natural charm. So in this movie Debbie (Angel) is a stewardess who leaves her boyfriend (Rod Grant) who is a pilot at home for her first job. This is more or less the movie since we follow this flight and its stop overs (a very long one who goes from San Francisco to Miami to Chicago to Dallas and ends at New Orleans). I will not say it's a great movie and the scenes are often inadequate (Shanna McCullough, Lynx Canon and Lili Marlene are wasted in this film). But a moment saves this movie from total boredom, the meeting between Debbie and Antone (Jamie Gillis) in a club in Miami where we finally get something erotic and fun to watch. The film itself is well shot by Charles Gray and we have no trouble believing that we are on a plane until the moment we see the cockpit (it's pretty obvious that the whole instrument panel is a photo). If you are a fan of Angel you'll definitely appreciate this film as she is in most of the scenes. If not forget about this film....


This film is available through Excalibur Films and Adult DVD Marketplace among others.
Posted by Jimmy at 1:52 PM