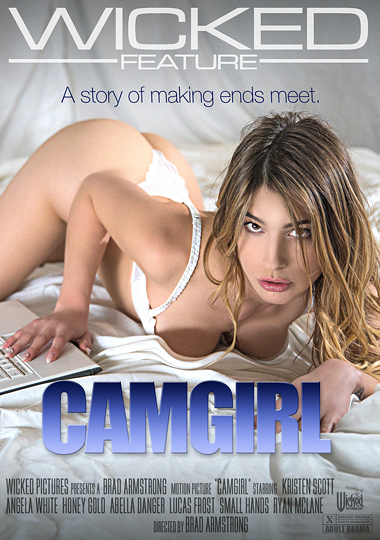 You certainly know already that I love Kristen Scott if you read my blog regularly, in fact she is the reason why I have started watching and enjoyed more recent adult film productions. So, to make a long story short, when I see her starring in a movie that sound interesting I buy it and this one seems to fit my enjoyment criteria. Let see if it's the case or not...

They do a cam show together and everything goes well, but this will not continue. Indeed her boyfriend, who is a more a guy she sees than a boyfriend to be honest, will learn from a group of friends what she does online and he will sure react like a jerk.

First he goes at Kelly's apartment for a confrontation that turns violent since he will break her wrist, but luckily her landlord shows up to tell him to get the fuck out before the confrontation become more violent.

But this isn't the end of Dillon revenge, I didn't say he reacted like a jerk for nothing, next he threaten to calls Kelly's father to let him know about his daughter online activities  Not knowing what she can do Kelly goes to meet some friends.

While she is with her friends Dillon call and repeat that he will call her father, Donnie (Small Hands) pick the phone from Kelly's hand and advise the jerk to not do it.


The following day Dillon calls to announce to Kelly that he told her father about her online career, but the worse is yet to come since his next planned move is to call the Child Protection Services. Enough is enough and it's time to put an end to that situation by showing to Dillon that the previous warning was serious.


Once again that was an enjoyable film, contrary to what I expected this is not a lighthearted view of the industry where everything is fun and game. The first half make it sounds like it will be, but after this half it's the end of the fun sides with the jerk boyfriend's revenge. As usual Kristen Scott is great and the rest of the cast do a good acting job too (some are quite good and some are just OK, but nobody is awful).

The webcam parts of the film are quite enjoyable, the Kristen Scott / Angela White cam show is sure good. A couple of scenes are more filler to meet the number of scene criteria, but the flow of the story isn't disturbed by those since the scenes are part of it. The film is a little bit long at 2h43 but Brad Armstrong directed the film in a way that you don't get bored after a while.

I got my copy from GameLink since I always buy my VOD from them but I'm sure you can get the film at the other stores where you usually buy your film. The movie is also available on DVD but I can't tell you if the extras make it a better purchase.