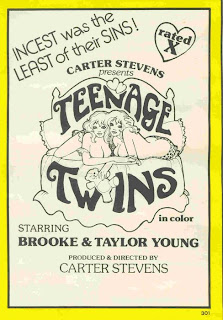 This film is the only one I had to remove from the previous site where I posted my reviews (I think it was there for one day at best). Which is understandable since this film contains scenes between two twin sisters and this website is family friendly. Now that I write on my own blog this is not really something I worry about, I could write about Animal Farm or Schulmädchen - Rasiert und mehr ein pisschen and it would not cause any problems. But do not worry, I have no intention of talking about that kind of cinema ...


Teenage Twins is included in the second volume of Carter Stevens'  films recently release by After Hours Cinema. As the title indicates the film has two twin sisters who certainly are not teenagers. The story is not really important since it makes no sense anyway. But in summary it is about a rare book uncovered by the stepfather of the twins girls who has many rituals including one to live forever, all that accompanied by way too many sex scenes.


Certainly not a great movie and I'm sure Carter Stevens would be the first to admit it. It's more a case of "we discovered two twin sisters ready to do it on screen we need to make a movie fast" than anything else. It is not enough to make a movie interesting for me. Without forgetting that Brooke and Taylor Young are far from being good actresses and are not really my kind of girl (Brooke has a pretty face, but otherwise ...). As I already mentioned the story (for what little there is one) is uninteresting, the cast is mundane (the only exception being Eric Edwards and this is far from being one of his best performances), the music is what you can call "porno music type" and the ensemble looks cheap. Double Your Pleasure the second film from Carter Stevens with the twins is supposed to be better, but it isn't in this set since it was made in 1978 and this one covers the period 1976-1977.


Not a recommanded movie, but don't forget this set include Rollerbabies with a Carter Stevens commentary track (that I won't review, since I already did it back in march)  and the X-rated version of Punk Rock that I will probably review in a couple of days.
Posted by Jimmy at 6:14 AM