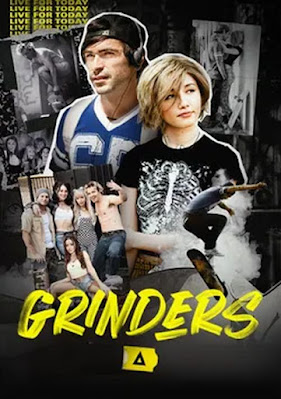 First major production in 2022 that I know of since I can't watch everything from Ricky Greenwood who is, as you should know already, my favorite adult film director. The film is set in December 1999 so a period I kind of know since it was my first university years.

Lucky (Lucky Fae) is at the stage between high school and college which is usually the time when we don't really know what we want to do with our life. Two choices are in front of him, a life of party with his friends or a more serious grown up road.

Currently he is a school drop-out having the time of his life with his friends which is surely a good thing since his mother throw him out and he can't stand his father (the feeling are mutual). We got a good image of the family dynamic when he shows up at the father home to pick up some stuff in the garage and his father accused him of stealing and being a good for nothing loser (I paraphrase here).

Wanting to change his mind Lucky goes at the skate park to meet his friends. They hang out for a while and decide to go pick Morgan (Maya Woulfe) to spend some time at the house of one of Robby (Robby Echo) friend he "takes care of" while he is on vacation.

After the misadventure at the house Lucky is relaxing with Paul (Nathan Bronson) at the warehouse apartment when the subject of Paul going to jail the next day is discuss. He wants to take over the business while Paul will be away... Paul doesn't want Lucky since he is a good artist with a future, but he finally gave up and set a meeting between his main supplier and Lucky later that evening... be ready for a big surprise and a fricking great acting performance during that meeting.

After the discussion with the supplier it's time for Paul's party and I must say it's an amazing party with a kickass band! At the stroke of midnight Lucky and Morgan go on the roof to end the evening and share their blossoming love.

When morning come it's time to come back to reality, Paul is going to jail and the big question is what will Lucky do? Continue to follow the path he is on or grow up and follow Morgan to Texas... nope I won't tell what he decides.

Simply said... the best film released by Adult Time since Teenage Lesbian! I didn't know what to expect from Lucky Fae since I never saw him as a first role type of guy but his performance was amazing... seriously it's the role he was born to play. Tommy Pistol is Tommy Pistol and once again he gave a great performance that kind of hit near home since I have that type of relation with my father since my twenties. Obviously I don't need to say that I have a bias for Maya Woulfe and once again she shows why she should have got the Best New Starlet Award last year. The rest of the casting was just perfect and it was nice for a change to see Nathan Bronson playing something else than a step son or a step brother. Money was put in the production and it shows... the cast of principal actors and extras was big, the original music kick ass, the make-up doesn't look cheap (in fact Maya was really cute with that wig), the set dressing for the skate park was really good and if you need an evidence of the care put in the film you just need to look at the underwater cinematography at the pool. The sex obviously was good, even the anal who isn't my cup of tea didn't put me off, and always nice to keep the best for last since we don't get Lucky and Maya until the end when they realize that they are in love with each other.

No surprise here I guess but I highly recommend this film who is available exclusively, at the time of my writing, from the Adult Time streaming service. I can't wait to see the next Greenwood's big project!