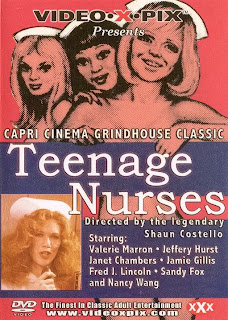 I had read plenty about this film before seeing it, but nevertheless I was totally unprepared for what I saw. This is undoubtedly the most bizarre adult film's I've seen so far, certainly not erotic or exciting but fun to watch for other reasons.
Basically this film takes place in a hospital for wounded veterans of the Vietnam War. A new doctor (Jeffrey Hurst with an accent quite pronounced) makes his arrival at the hospital to implement a new entertainment system for the veterans. It would be easy to think that this will be more or less Candy Stripper well no ... You have to take entertainment for exactly what the word means and that is where the bizarre begins. Indeed throughout the film we will see performances by several real burlesque artists. In fact, many times the action is interrupted by performances of singers, dancers, jugglers and even a band wearing the weird transparent mask from Last House on Dead End Street during his performance. If this is not strange enough you can add Shaun Costello playing a journalist, with a look that must be seen, who sure had some difficulties to remain serious (something quite understandable) or the presence of a laugh track or the fact that one scene outside the hospital is repeated twice. While watching I was unable to stop thinking at the audience watching this movie at the Capri Theatre in 1974 and I couldn't stop laughing imagining their reactions to what was on the screen in front of them.
As mentioned at the beginning this is not really an exciting film and the action isn't really well-filmed, but this movie is entertaining for what it is: a chance for many old artists to demonstrate they are still able to perform quite well. The film distribution includes Valerie Marron, Laura Cannon, Sandy Foxx, Jamie Gillis, Fred Lincoln, Ashley Moore, Levi Richards and of course a lot of burlesque artists.
This one is available from Video-X-Pix and I must thanks Steven who sent me this one a couple of months ago.
Posted by Jimmy at 1:19 PM